Uddhav Thackeray, the 57-year-old and claimant for the job of Maharashtra Chief Minister reportedly has 12 stents in his heart after a major surgery in 2016. Thackeray, who heads the Shiv Sena, has been largely sleepless in Mumbai for nearly 72 hours. His worried wife Rashmi and sons Aaditya, newly-minted MLA from Worli, and Tejas are hoping that Thackeray will take a nap after the Supreme Court ordered today that a floor test for rival Devendra Fadnavis must be completed tomorrow by 5 pm.

Wishful thinking for the family. The judges rejected the BJP’s argument that there is no need to rush a floor test. Thackeray is now busy trying to ensure that his combo with Sharad Pawar and the Congress bests the BJP in tomorrow’s test of strength in the Maharashtra legislature.

After the Supreme Court today agreed with virtually every contention of the anti-BJP combine, a jubilant Thackeray called Sharad Pawar, who is 79 and the head of the NCP, for a strategy session. Both have decided to jointly address the corralled camps of their MLAs (last evening, they produced 162 MLAs at a hotel to prove they can, with the Congress, win the right to govern Maharashtra). 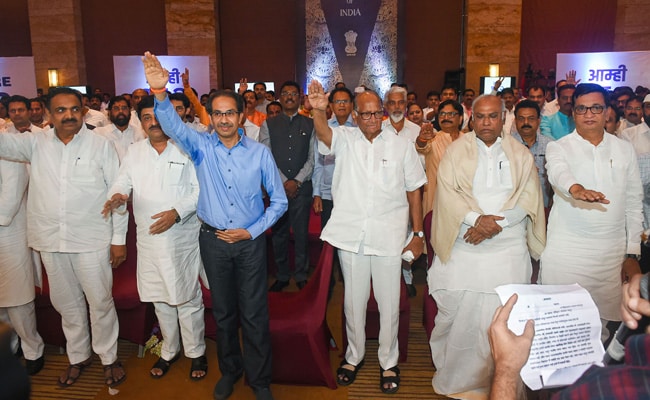 The Shiv Sena, NCP and Congress gathered their MLAs at a five-star hotel in Mumbai yesterday for a show of strength

The Congress, which had to overcome internal objections to partner with the Sena, has provided legal muscle in the shape of senior counsels Kapil Sibal and Abhishek Manu Singhvi who argued the combine’s case in the Supreme Court. The party will send senior leaders Ahmed Patel and Mallikarjun Kharge by this evening to Mumbai to ensure the Congress flock of 44 MLAs stays together.

This morning, Patel rushed to Sonia Gandhi, currently head of the Congress, to give her the news in the Lok Sabha of the floor test. The Shiv Sena’s MPs then joined joined a protest led by Sonia Gandhi – possibly a historic first for two parties whose ideology is dramatically divergent.

What the Congress and the Sena are watching out for is the enigma that is Sharad Pawar. He claims that nephew Ajit Pawar acted as a lone agent in formally committing their party’s 54 MLAs to the BJP. Politicians of all colours are trying to figure out whether the split between the Pawars is for real or a carefully orchestrated façade to team with the BJP to gain power.