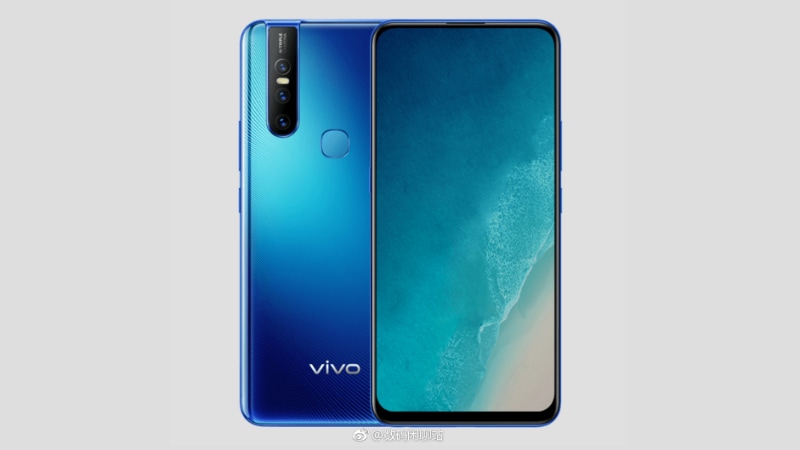 Just days after the V15 Pro debuted in India with a pop-up selfie camera, a new model called has been leaked with moniker Vivo S1. The new phone is tipped to come as a cheaper option against the Vivo X27 that is expected to arrive on March 19. Key specifications of the Vivo S1 include a full-HD+ display and an octa-core MediaTek Helio P70 SoC. The new model is also rumoured to have a triple rear camera setup and a pop-up selfie camera module – similar to the Vivo V15 Pro. The Vivo S1 is also said to come with a price tag of around CNY 2,000 (roughly Rs. 20,800).

A tipster on Weibo has leaked the specifications and price of the Vivo S1. The unannounced phone is said to have a 6.53-inch full-HD+ (1080×2340 pixels) IPS display along with a 19.5:9 aspect ratio. It is also rumoured to have an octa-core MediaTek Helio P70 SoC, coupled with 6GB of RAM and 128GB of inbuilt storage.

Similar to the V15 Pro, the Vivo S1 is said to have a triple rear camera setup that comprises a 12-megapixel primary sensor, 8-megapixel secondary sensor, and a 5-megapixel tertiary sensor. The phone is also rumoured to come with a pop-up selfie camera module that could have a 24.8-megapixel sensor.

The same Weibo tipster has also leaked a render showing the front and back of the new phone, which looks similar to the Vivo V15 Pro.

Interestingly, Vivo doesn’t have an S series as of now, though it has brought its pop-up selfie camera phones under the V series recently. The Vivo S1 is, therefore, likely to be the China variant of the Vivo V15 that arrived in Thailand last week, though the resolution of the pop-up selfie camera is different. The phone notably carried a price tag of THB 10,999 (roughly Rs. 24,200) for the lone 6GB RAM/ 128GB storage variant.

We need to wait for some days to understand Vivo’s plan with the leaked phone. But in the meantime, the Chinese company is busy in preparing the launch of the X27 as its new pop-up selfie camera phone with a triple rear camera setup.

The launch event for the Vivo X27 will take place in China on March 19. From the rumours and the photos teased by the company, the new phone appears to be quite similar to the Vivo V15 Pro that was launched in India last month.